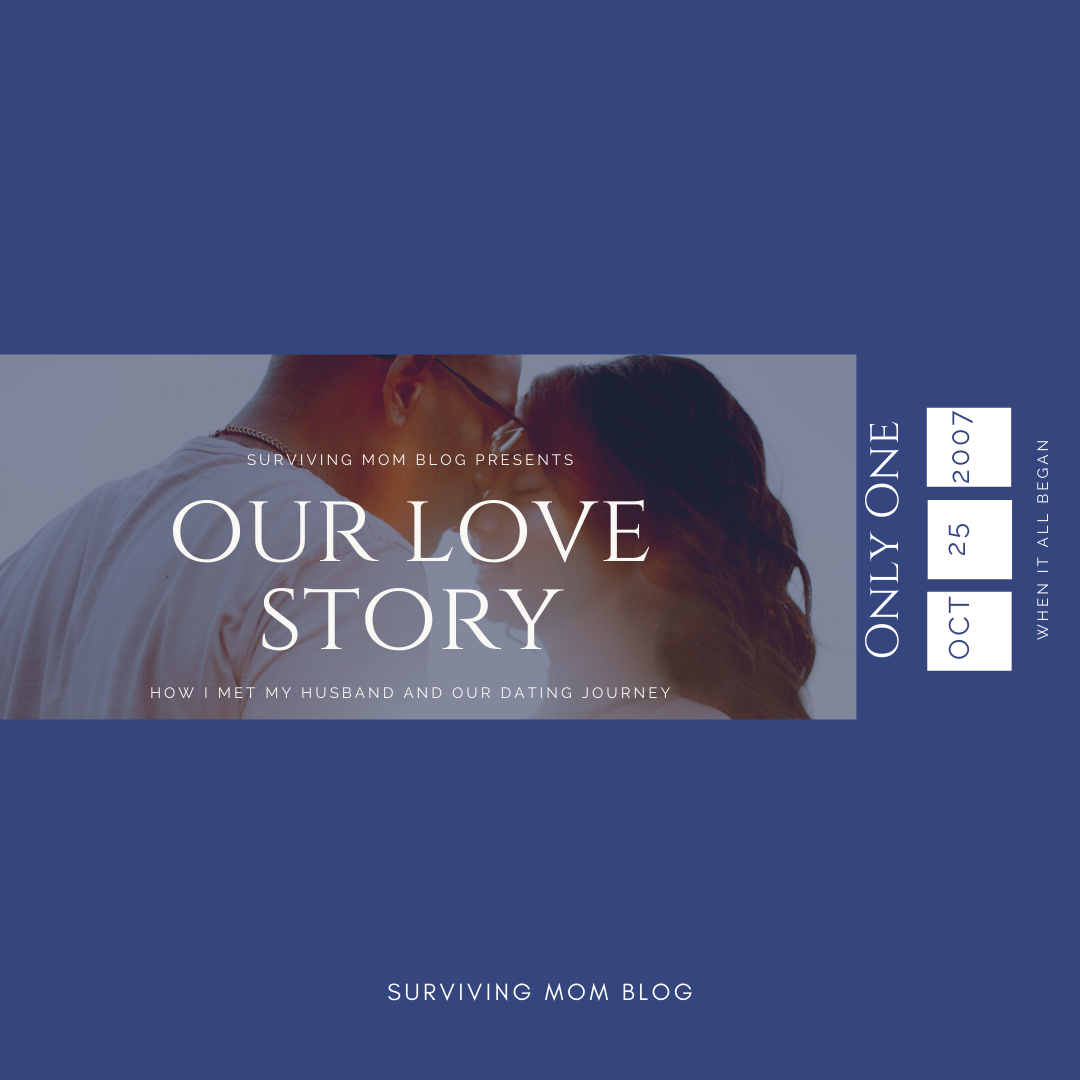 This upcoming August, my husband and I will celebrate our 12th wedding anniversary.  We have been together for almost 14 years. I’ve shared many personal posts before, but this one is different. I’d like to tell you a love story about how I met my husband…..

I was single for about two years prior to meeting Matt and using a Jewish dating service called Jdate to meet men. In my master’s degree program, there were only women. I went on online dates, LOTS of them. I basically dated everyone in the tri-state area. Sometimes I went on one or two dates with some of the men before deciding we weren’t a good match, and others I dated for about a month. None of them amounted to anything substantial. After I reached my quota of bad dates, I would go off Jdate for months at a time.

I was once again contemplating going off Jdate when a man sent me a message. His profile picture was in poor lighting, and he was wearing a multicolored striped shirt with a very loud tie. I had dated online long enough to know that if a guy is hiding in his picture, it’s never a good sign. On top of that, he kept bragging about how wonderful he was and how he was waiting for the perfect woman. Bad profile picture + arrogant= loud warning bells.

I had a rule that I would only meet men on my turf (Brooklyn) for the first date. I once had a guy drive for two hours to meet me. This guy told me he worked in Manhattan, and if I wanted to meet, I’d have to travel to him.

I don’t know how this conversation turned into me consenting to take the bus and train to Manhattan to meet him. It is one of the great mysteries in my life. Was it divine intervention or did I have temporary insanity? One will never know for sure.

my love story: how i met my husband 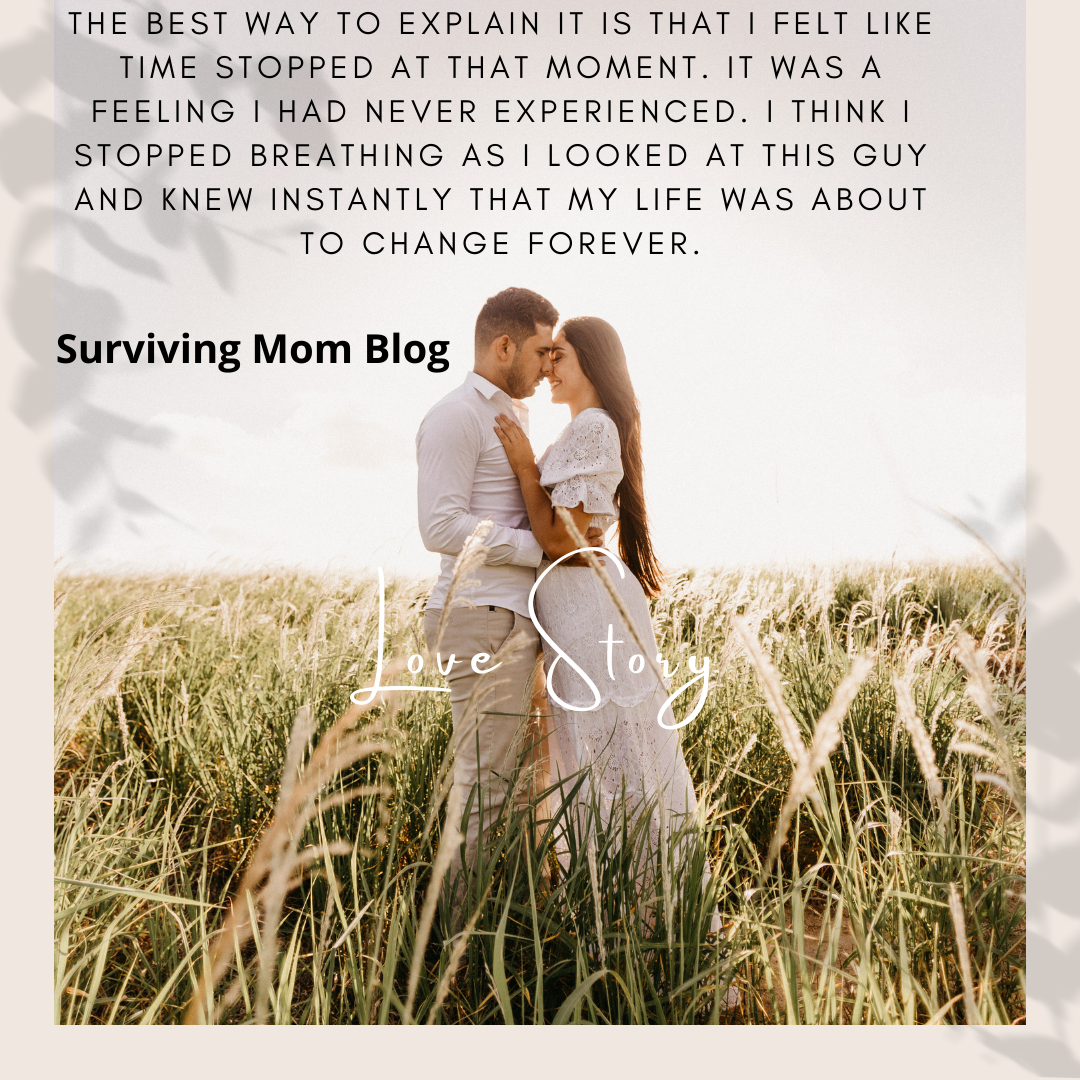 All I know is that on October 25, 2007 at approximately 6pm, I stood in front of an H&M waiting to meet this guy. I remember cursing myself out in my head for agreeing to this until I saw a man walking towards me smiling. With that one look, my love story began.

The best way to explain it is that I felt like time stopped at that moment. It was a feeling I had never experienced. I think I stopped breathing as I looked at this guy and knew instantly that my life was about to change forever.

He gave me a hug, and we went to a restaurant to eat. The food was terrible, but the conversation more than made up for it. He was extremely attractive, but more importantly, he was smart, funny, witty, and down to earth; nothing like how he came across in his messages.

i knew i WOULD MARRY HIM

I excused myself, and I joked with him that if I didn’t come back in ten minutes, that I had probably climbed out the bathroom window. Then I walked to the bathroom, took out my phone, and told my mom that I had met my husband. I was going to marry this man I had just met named Matthew.

He suggested that we go bowling, but the bowling alley was only taking reservations. We decided to go to Central Park instead, and we walked over to the Belvedere Castle. It was where we had our first kiss. Afterwards we sat on a park bench and talked for hours.

It was getting late, so he hailed me a cab. He told me to text him when I got home to ensure I arrived safely. I was in a haze the entire ride home.

We were pretty much inseparable after our first date, and it was only three weeks later that he told me he loved me.  As silly as it might seem, I felt that way too.

OUR FIRST VACATION WAS FILLED WITH MONO

Within a few months we planned a weekend getaway upstate.  The evening that we arrived at the hotel, Matt started feeling unwell. By the next morning he had a high fever, and we immediately returned home. Bloodwork was drawn, and the tests revealed that he had mono.  We were told that adults who get mono can get very severe symptoms, and Matt proved to be no exception. 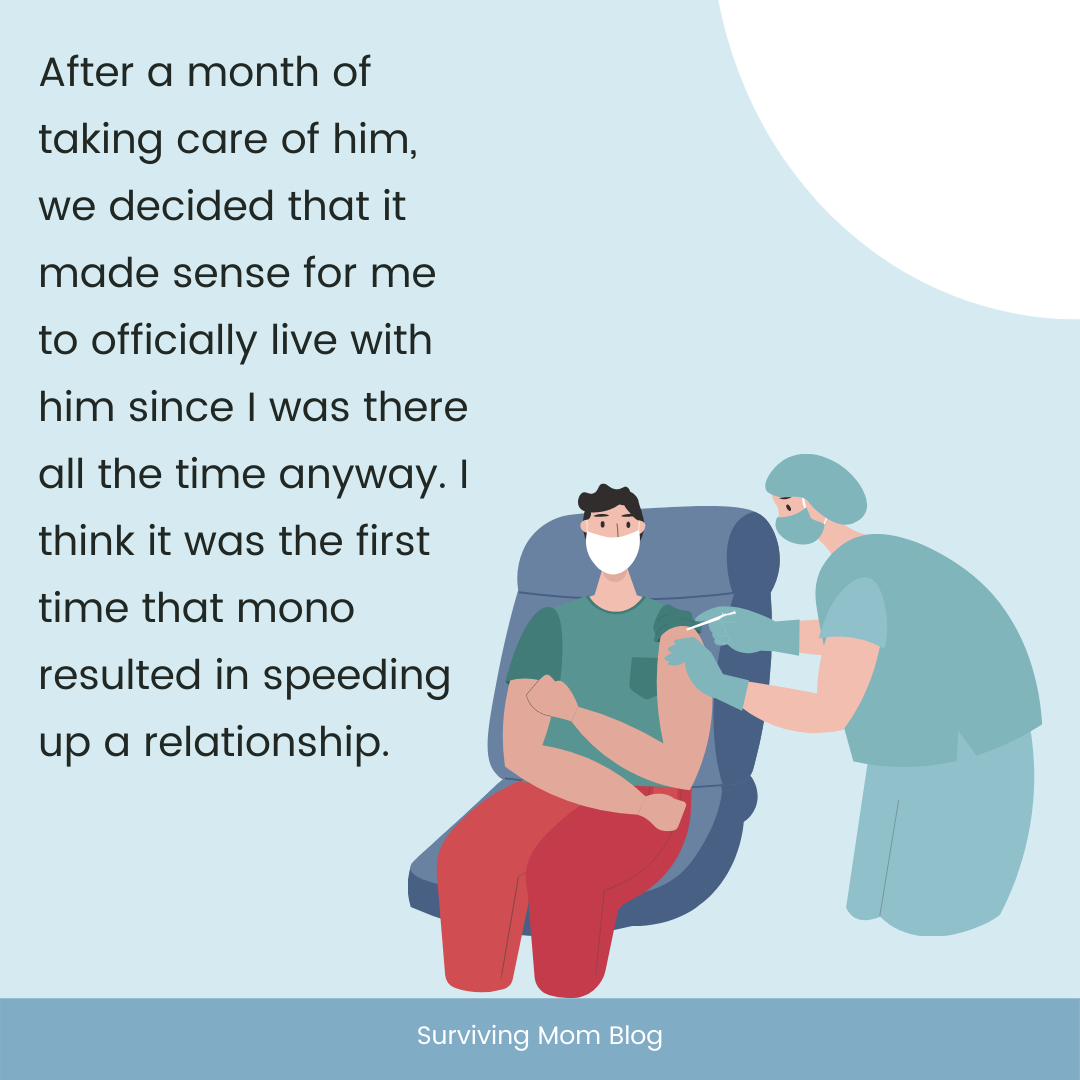 The poor guy was so weak that he could barely move.  He was unable to work and had to go on short term disability. Subsequent symptoms included a severe case of strep throat, fatigue, and nausea. I remember one day when we had to rush him to the emergency room because he broke out in hives all over his legs. They informed him it that he had an allergic reaction to the antibiotics he was taking.

When we got back to his apartment, I put calamine lotion on his legs to help with the itchiness. He then stood up and asked me to dance. He put on David Gray’s “This Year’s “Love”, which became our song. Despite these unfortunate circumstances, we were together, so we were happy.

Although I technically lived in Brooklyn, I was constantly taking the train back to Manhattan to take care of Matt. He couldn’t take care of himself and lived alone, and so I became his caregiver. I cooked, cleaned, and tried to make him as comfortable as possible. I did all this while going to graduate school in Brooklyn, and I hadn’t known him for very long, but there was never an option in my head to not be there for him.

After a month of taking care of him (and only a few months into our relationship), we decided that it made sense for me to officially live with him since I was there all the time anyway. I think it was the first time that mono resulted in speeding up a relationship.

After a year of dating, Matt took me to our favorite Italian restaurant and ordered some wine. I am not a big drinker, so I was tipsy by the second glass. It was a beautiful night, so I suggested going to Central Park which was nearby. He then took me to the spot at the castle where we had our first kiss. He took out his iPod, played our song, and asked me to dance. Suddenly, he got down on one knee and asked me to marry him. It was magical. It was so magical that we almost forgot that I spent the entire walk there talking about the high divorce rate. I don’t know how that topic even came up, and I blame it all on the alcohol. 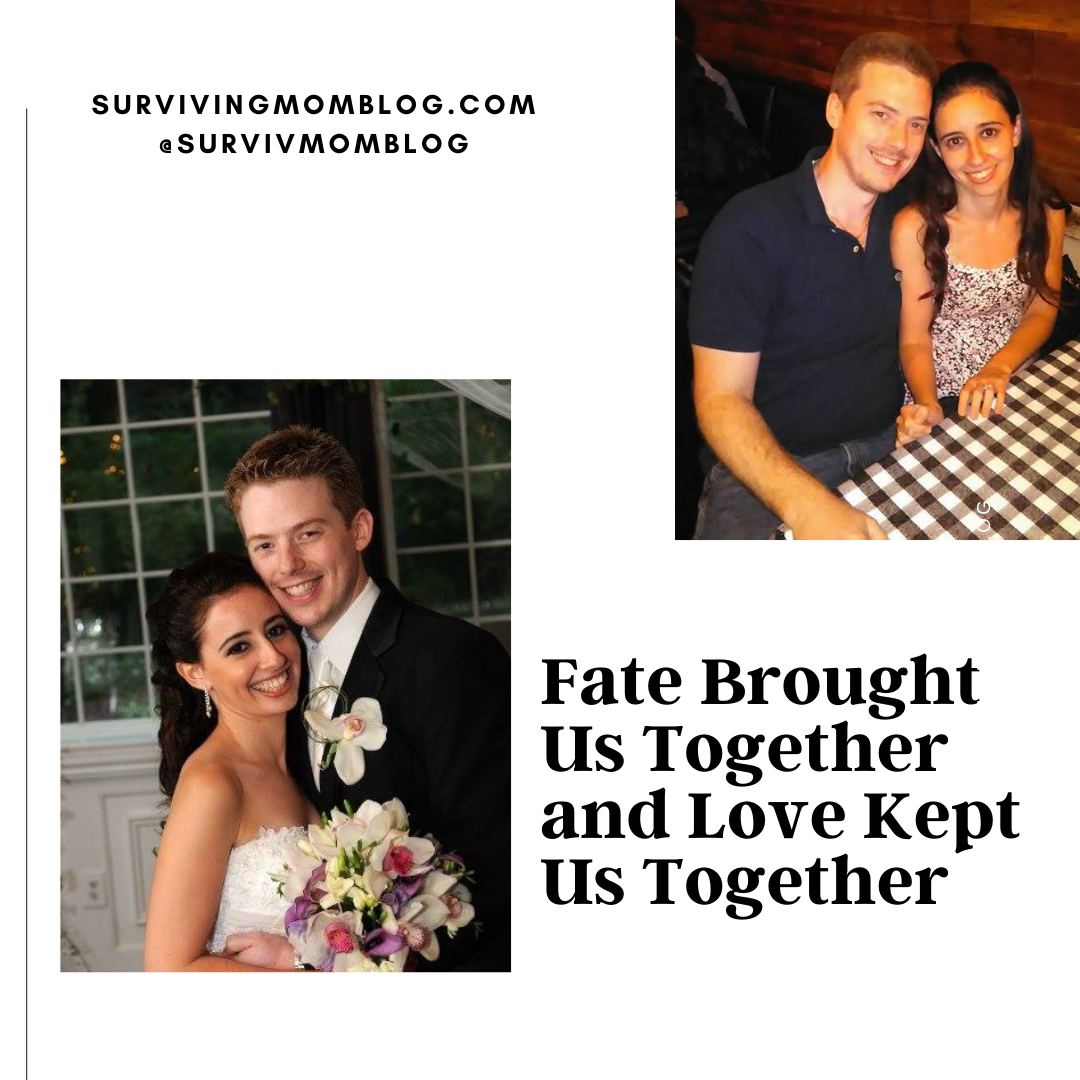 We were married on August 2, 2012. We had planned an outdoor wedding, but to my horror the skies opened up that morning and didn’t stop. Although the wedding didn’t go as I planned, the sun did come out during the reception, and we were able to go outside. Despite the anger I felt about the rain, our wedding was magical.  I wouldn’t change a thing about our love story.

Our wedding was very symbolic of marriage. Whatever your dreams of marriage might be, life will inevitably get in the way. I learned that although our love story is beautiful, what makes our love memorable is that we navigate life’s roadblocks together.

It still amazes me that somehow, against all odds, a guy I never would have met under any normal circumstances became the man I now call my husband.  That’s the beauty of life. It may throw curveballs (as well as mono and rainstorms) at you, but sometimes it also throws you a home run.